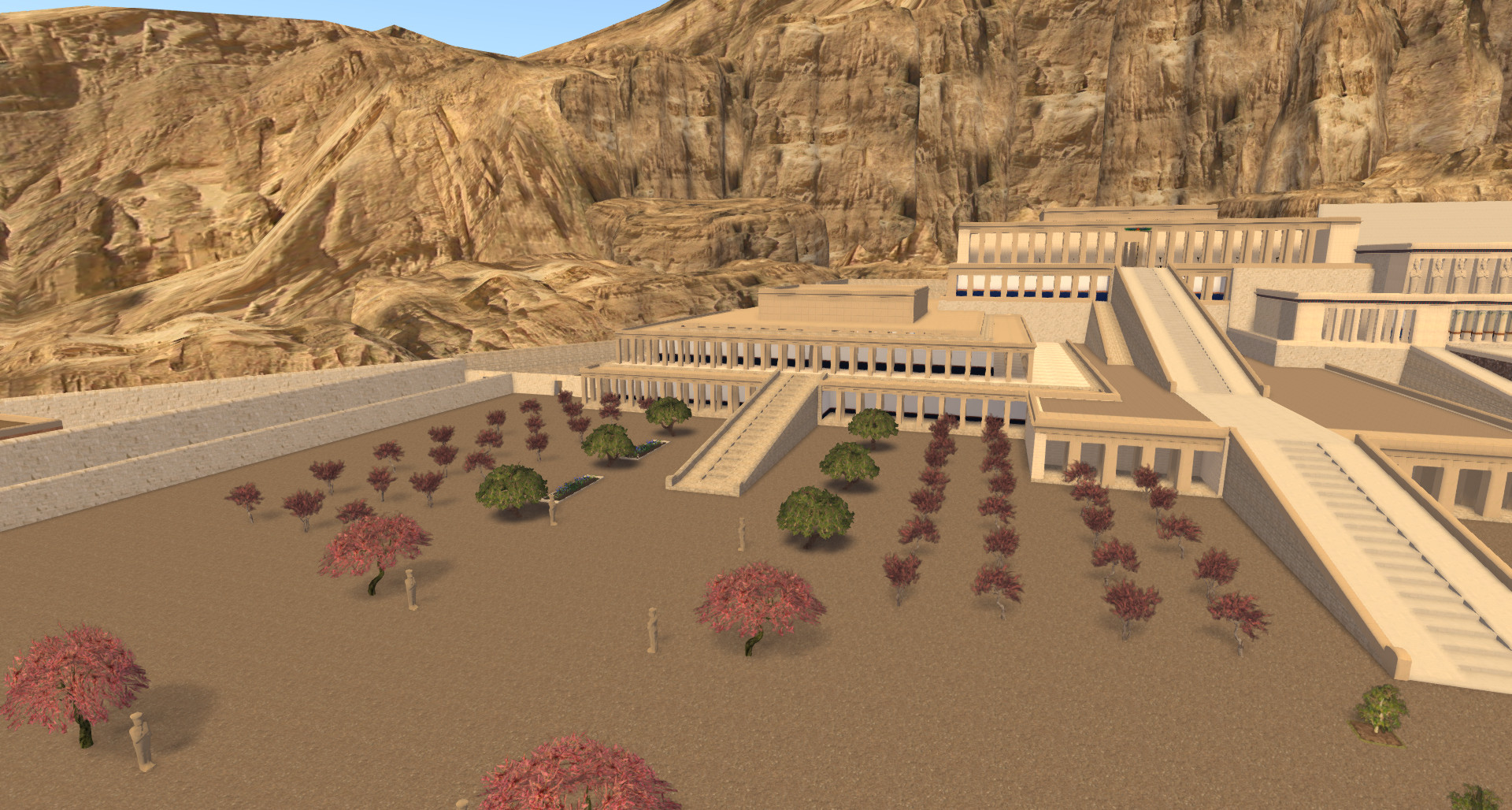 Today we finished the temple garden of the Mortuary Temple of Mentuhotep II - for the second time. Due to a new source, we have found by accident, we had to make some changes to the previous arrangement.

There has always been an unanswered question about the plans of this garden, we had found so far. Between two of the large tree holes on the south side of the ramp leading up to the temple, there were two square structures drawn. But by reading further, we just could not figure out, what those strange drawings were supposed to mean.

But now, two days ago, we found another source. It was a book named 'The Temple of Mentuhotep at Deir el Bahari' written by Dieter Arnold in 1979. At first, we were a bit suspicious about its accuracy, to be honest, for it was quite outdated. But then, those strange two squared shapes, that had been a mystery to us all the time, were suddenly mentioned. And that was, what really made us excited about this source. Arnold even gave the right dimensions of the squares here - and telling by some findings of plant remains, he interpreted them to be flower beds! And as those, they would have been a very common part of any temple garden in ancient Egypt.

We were very happy about this new information at first - if there had not been not two other ones, that lead us to a broad reorganisation of the whole temple garden, we had rebuilt this far. To say it in short: We planted the wrong trees in the wrong holes. It was true, that there were some larger sycamore fig trees planted on the left and right side of the ramp leading up to the temple, just as we had planted them there. But unfortunately not through the whole avenue!

The tree holes behind the statuaries of Mentuhotep II, that line the avenue, were planted with tamarisk trees. Their remnants were undoubtedly found in those holes.

So we had to remove all the sycamore trees lining the avenue of our model, and replace them by tamarisks.

The second information affected the number and formation of the small holes behind the large sycamore trees on the north side of the ramp. We therefore had to add 8 small tamarisk trees there, too.

Then we built the square flower beds on the south side of the ramp. They were described as 1,85m wide and about 6,80m long, which fitted accurately into our arrangement! There was not much more information given in the source. Only the facts, that they were filled with mud and contained flowers. For illustrating purposes, we added a stone border to them, to keep the mud in. There surely must have been some kind of border, but we cannot tell, if it was made of stone or another material.

Also the flowers we planted there, are only an example. We planted some daisies and iris there, accompanied by yellow bitter herbs. All those flowers were common in ancient Egyptian temple gardens. They were used for decoration purposes in the sanctuaries of the temples. But if they were also planted in those square flower beds in front of the real temple, we can only guess.

It was some work to be done - but now we are proud to present our visitors a more plausible version of this ancient garden in front of the Akh-sut-Amun.