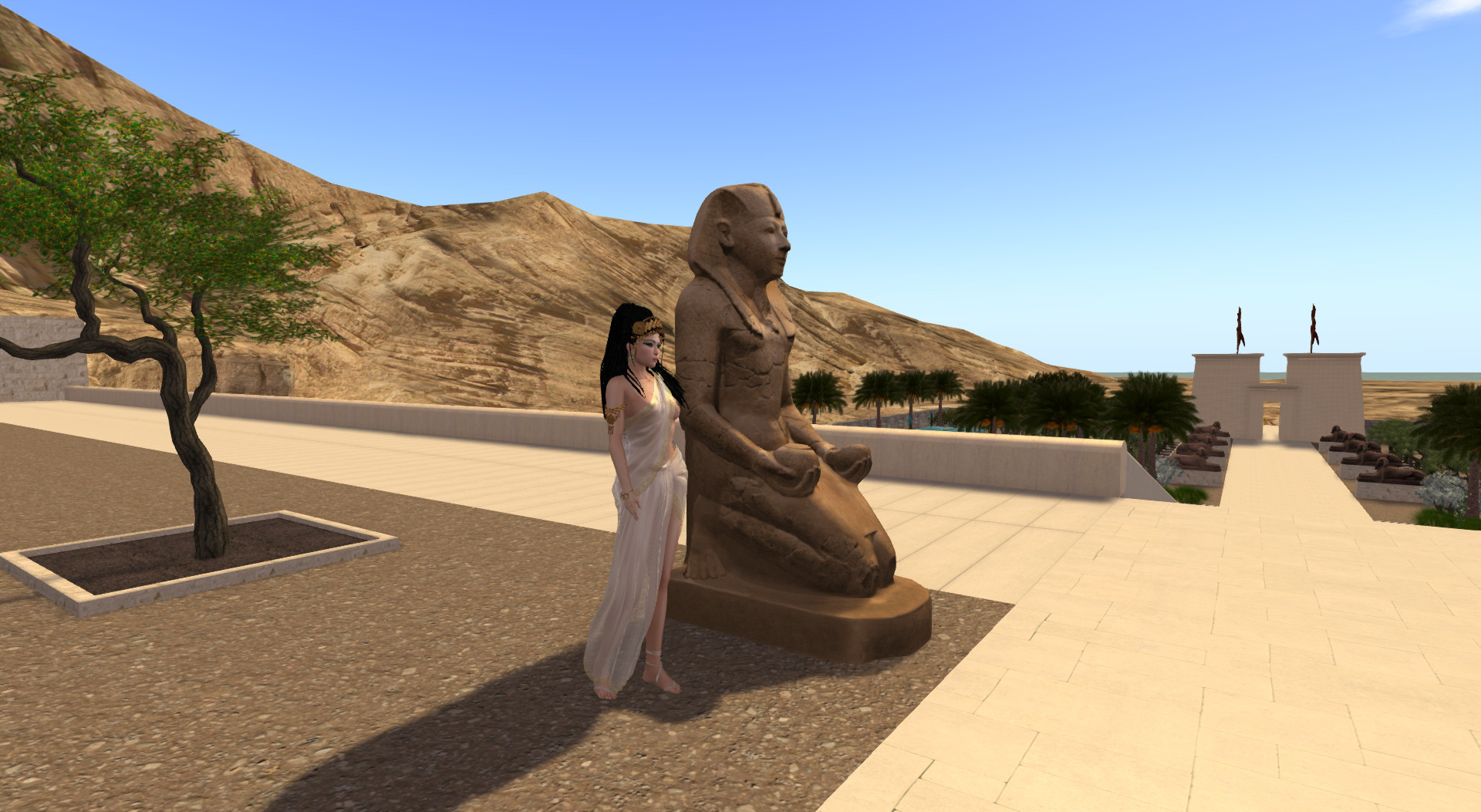 From the Metropolitan Museum of Art we got a 3D mesh model of one of the Hatshepsut statues from the middle terrace.

The kneeling statues shows a colossal representation of Hatshepsut as the ideal Egyptian king - a young man in the prime of life - and replaced the sphinxes from the lower courtyard and the roadway that led to Hatshepsut’s temple. We opted for a placement on the middle terrace, as this place seemed to us to be the most probable, taking into account the side of the find of the fragments, and because most of the publications we found also indicated this location as the most probable.
Nevertheless the location is not 100% secured, other sources have assumed these statues in the upper courtyard. (For this reason you can also see two pictures of the statues placed on the upper courtyard.)

Altogether there were probably eight of these statues in different versions. Some of the statues were depicted wearing the white crown of Upper Egypt. Others, like this one, wear the nemes-headcloth. Hatshepsut also wears the false beard and shendyt-kilt that are part of the regalia of a Egyptian king. The inscription on this statue indicates that Hatshepsut is offering Amun Maat (order, truth, or justice). By making this offering, Hatshepsut affirms that Maat is the guiding principal of her reign.

Like almost all of the Queen's pictures in the temple, also these were destroyed relatively quickly after her death, and the pieces of rubble were disposed behind the northern wall of the lower court. Due to the very hard material (red Aswan granite), however, it was very difficult to achieve complete destruction in ancient time.

Fragments of these statues were discovered during several seasons of excavations by the Metropolitan Museum of Art’s Egyptian Expedition in 1927-28. In the division of finds, the most complete examples were sent to the Egyptian Museum in Cairo. But Fragments of the statues given to the Metropolitan Museum were reconstructed in New York by attaching them to metal armatures and filling in the gaps with plaster. Our model shows one of these reconstructions, the original can be seen at Met Fifth Avenue in Gallery 115.

THANKS to the MET!

Note: We take the view that these statues stood exclusively in the middle yard. Nevertheless, we wanted to show the minor opinion anyway for this post here. In our SL model is the upper yard not equipped with these statues!

The Large Kneeling Statues of Hatshepsut