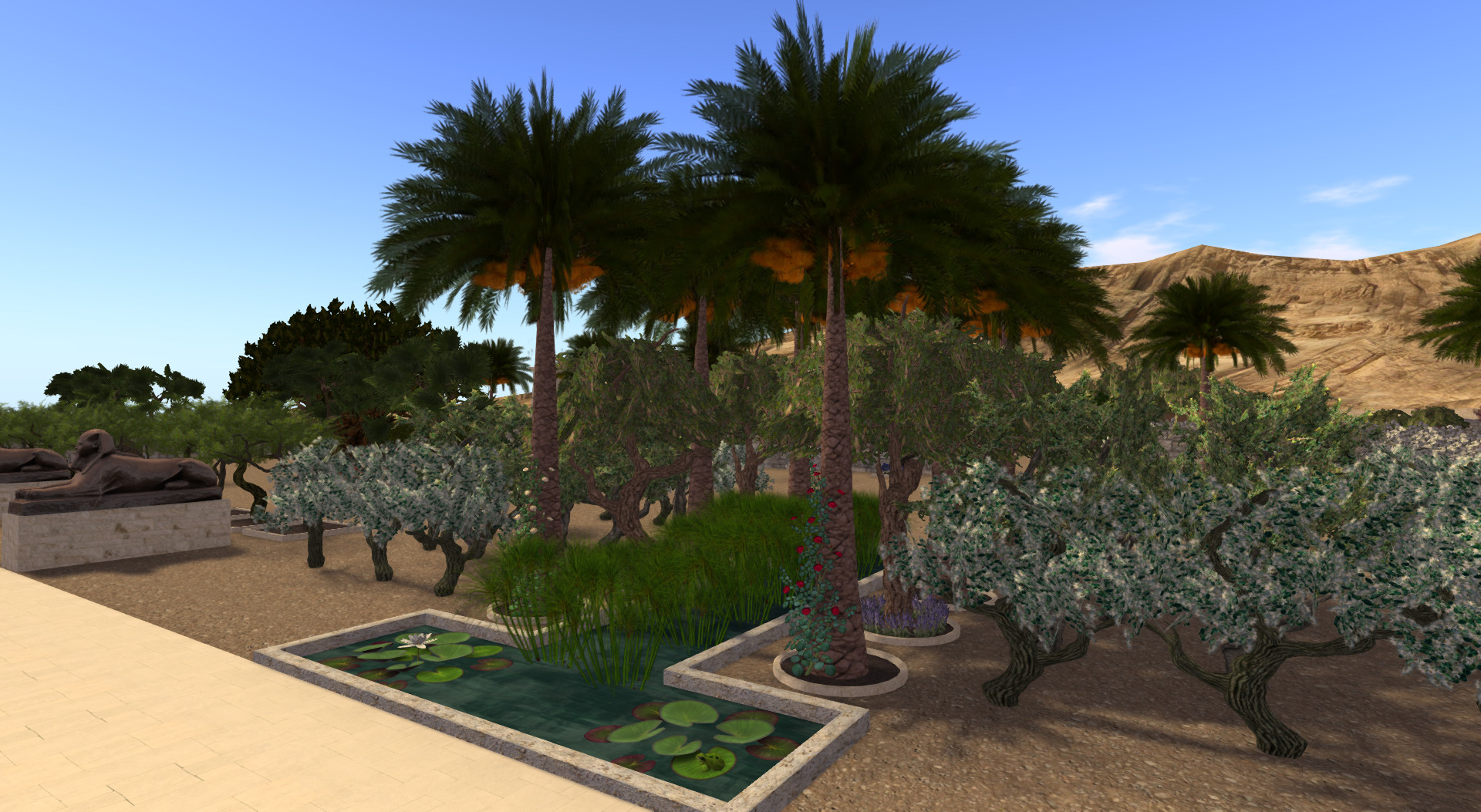 The T-shaped garden ponds and the planting problem

We build the T-shaped ponds according to the specifications of Z. E. Szafrański's document "DEIR EL-BAHARI The Temple of Hatshepsut - Season 1999/2000", page 203; which is based on the work of M. Boruta (1999) and the excavation of the SCA Gurna Inspectorate.

According this, each of the two ponds measures 10.40 meters (20 cubits) in length and 6.25 meters (12 cubits) in width, by an unknown depth. The form follows a large latin T-letter.

We had to estimate the distance between the ponds and the beginning of the lower ramp from photos, since the exact distance to the lower ramp was not known to us, because Szafrański is silent about it. However, the deviation, occurring due to the parallax error, is presumably negligible and should be significantly less than a half meter.

For the planting of the pond edges we had found very few written sources from the time of Hatshepsut. Most sources, that describe the original garden, speaks only of a fragrance garden, or say a little more about some tree species in it. But no source from time gives an exact description of the garden. And also the known findings on site are only very insignificant. That is a big problem for a reconstruction project like ours.

And so, we wanted to follow this arrangement, but we quickly noticed that this was associated with an unexpected problem. It was in fact very quickly discovered by our "garden girl", Anna Liu, that the distance between the planting holes was too small to plant the trees in them. But trees had to be planted around these ponds, this was undoubted.

This knowledge followed both, from the written sources to the place, and also from the Egyptian garden tradition, which in many documents shows us a very standardized sequence of trees on the edge of cult and house ponds. All these sources spoke of a regular sequence of date palms and sycamores in the first line at the edges of a pond, with planting of further trees and shrubs in the back rows.

However, trees and shrubs need a certain space to flourish well. And the ancient Egyptian gardeners were certainly endeavoured to create the best conditions for these trees, because they had to do it partly with very precious import plants from the Punt expedition. But this place was obviously not already present for half-grown man-sized plants, when every hole in the ground had been planted with a tree, as it turned out.

But what could be the explanation for the number of plant holes?

Now, in our opinion, the too high number of plant holes per square meter, carved into the rocky subsoil, is a consequence of the first planting of the very young trees from the time shortly after the Punt expedition. However, these little trees had to be transplanted, after a while in order to dwindling the rows and to give the remaining plants the necessary space for growing.

From this consideration, we decided to plant only every second planting hole with a larger tree. The result are shown in the pictures below.

Directly at the edge of the ponds, Phoenix dactylifera and Ficus sycomorus alternate. Behind it are on either side three further rows with Styrax officinalis (white flowering) and Commiphora myrrha, within the Styrax trees. The water surface of the ponds was planted with the inevitable papyrus plants (Cyperus papyrus) and differently coloured water lilies (Nymphaea caerulea).

Fragrant lavender at the feet’s of the date palms and rosebushes on the trunks of the outer palms complete the scene, and give, as we hope, a good impression of a possible original condition of the two important planted cult ponds of the Hatshepsut temple.

Possibly, the plants were never as big as seen in the pictures. We will hardly know. The location in the desert valley is very hostile and required a very elaborate gardening care. But if this care took place long enough, it would have been possible for the trees to reach a height that enabled cows to walk under them as we can see it on the relief of the amazing Colonnade of Punt.