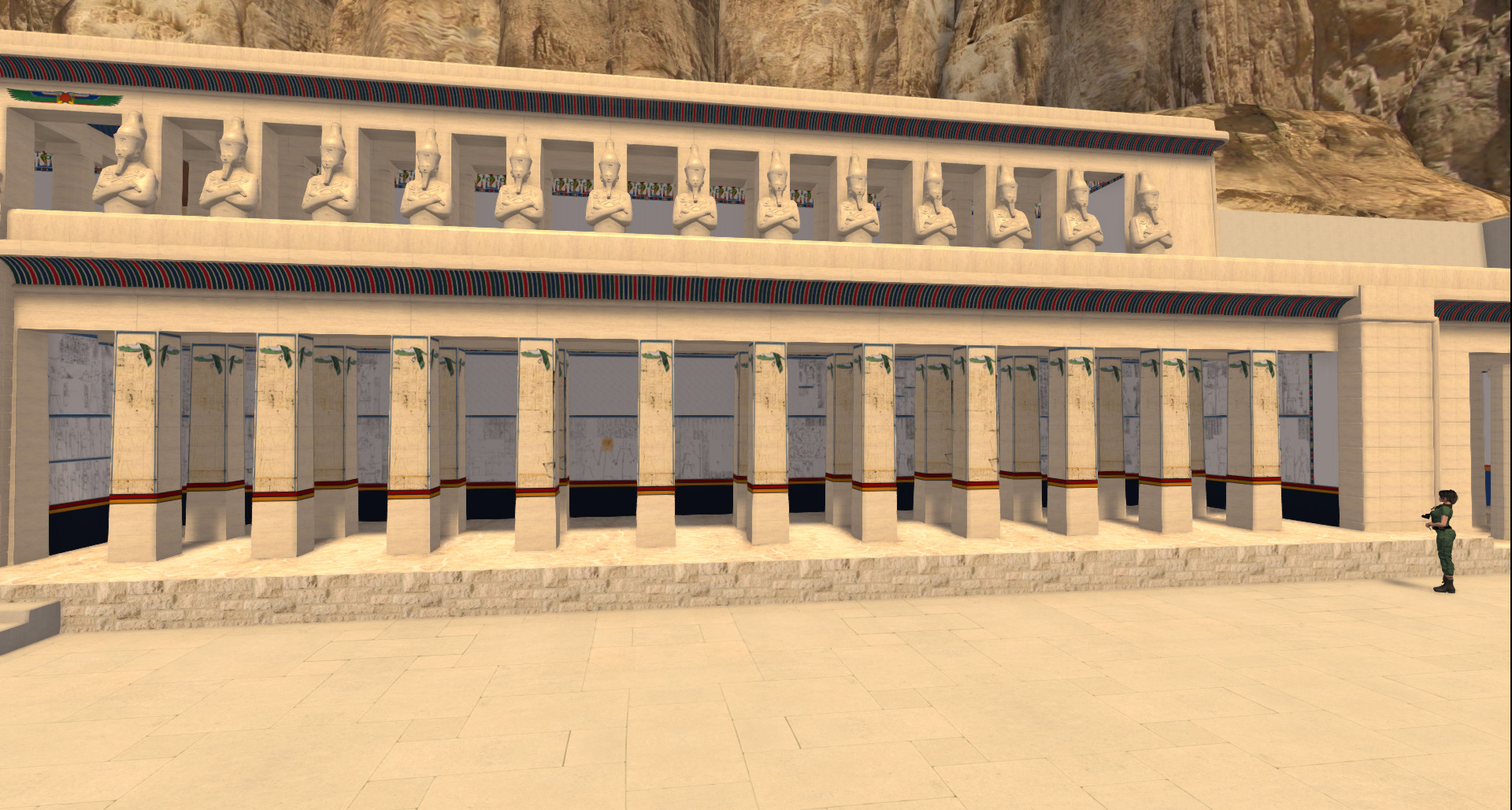 The murals of the Birth Colonnade and their hidden secrets

We finally finished the reconstruction of the murals on the walls of the Colonnade of Birth on the northern side of the upper ramp of the Mortuary Temple of Hatshepsut – and it was a really tricky thing to do!

As with the Colonnade of Punt on the southern side of the ramp leading up to the temple itself, we decided to use again the black and white pencil sketches published by Edouard Naville. Due to the age of the wall paintings, their original colours cannot be carried out well anymore. But for getting a better impression on how the original wall designs may have looked like, we made again some exemplary colorations based on known colour shemes of well-researched elements as a suggestion. It must have been a rather more impressive sight though in its originally full coloured design.

Though Naville showed detailed sketches of every single part of the murals, and documented the sequence of the single pictures, their original positions on the walls was still not totally clear to us. We used a variety of photos taken from the walls by tourists and scientists, but none of them showed the whole ensemble to us. Another problem in reconstructing the positions was the huge gap in the mural in the middle of the main western wall. There the told story of Hatshepsuts mythical birth and her becoming Queen of the Two Lands was violated by the obsessive erasements of picture parts, her step-son and nephew Thutmose III has made after her death. The large white space might perhaps have contained a special hint on Hatshepsuts mythical semi-divine status as the daughter of god Amun, which was the main justification for her later designation as a female Pharaoh, and has been concerned a sacrilege afterwards on behalf of her nephew.

Another thing to deal with, while trying to reconstruct the whole mural, was that even nowadays no one can really tell about the meaning of some of the pictures. Naville made a great effort in translating the hieroglyphic descriptions that flank the pictures, so we know about the main topic of the mural. But not all parts of the story can be understood by the current state of research.

The story of Hatshepsut starts on the southern side wall of the gallery, where the gods decided on her birth. We see the act of her procreation implied on a picture on the western main wall of the colonnade, as her father helds an anch on the forehead of her mother queen Ahmose. Ah-mose, whose name meant literally ’Moonborn’, is still a rather mysterious figure to current research. Though her name and titles are shown often, her parents are never mentioned. One of her titles is ’Sister of King’ which may be a hint, she was a sister of Hatshepsuts father Thutmose I. But it could be also any other king, and so in fact we do not know about her origin, which is rather unusual for a woman of her status.

The child Hatshepsut is then after her birth introduced to the gods. We see two children on the pictures, that are shown to different deities. One is representing the child Hatshepsut herself, the other one is a symbol for her soul, called Ka, which is a common motif on murals like these. We see her going through different initiation rites then, whose meanings are not available to current research, but they may be part of her reaching the status of an adult. The last part of the mural on the northern side wall of the colonnade finally shows her coronation as Queen of the Two Lands.

It was a great task for us, to make it possible to show the whole Birth Gallery to our visitors, for it can be only seen in this detailed form on the original place in Deir-el-Bahri itself. We are glad, we finally finished it successfully and hope you will enjoy this impressive sight!